I have a long forgotten memory from my childhood of evenings spent at my grandparents watching nature programs. Mostly this involved epic battles between alligators and unsuspecting deer or a lion taking down zebras in the Sahara. These programs were the original 'Reality TV'. I remember once seeing a show featuring Komodo Dragons. A real life dragon that had somehow escaped the ice age like so many of its forgotten ancestors.

These real life dragons lived in some far off exotic country and would forever just be an exciting feature on the Discovery Network.

That was until I moved to Indonesia where the elusive Komodo Dragon lives and I knew couldn't miss the chance to see them with my own eyes.

Last week while I was in Labuan Bajo I booked a boat to take me to Rinca Island (I couldn't afford the hefty price tag to get to Komodo Island).

The Komodo National Park was recently nominated as one of the new 7 wonders of the world. Like many of the must-see tourist attractions out there. The experience wasn't what imagined it would be.

FACT: The Komodo dragon's diet is wide-ranging and includes invertebrates, other reptiles (including smaller Komodo dragons), birds, bird eggs, small mammals, monkeys, wild boar, goats, deer, horses, and water buffalo. Occasionally they consume humans and human corpses, digging up bodies from shallow graves. This habit of raiding graves caused villagers of Komodo to move their graves from sandy to clay ground and pile rocks on top of them to deter the lizards.


FACT: Young Komodo Dragons spend most of their first few years in trees where they are relatively safe from predators (mainly cannibalistic adults Komodos).

FACT: The Komodo Dragon, also known as the Komodo monitor, is a member of the monitor lizard family. It is the largest living species of lizard, growing to a maximum length of 3m in rare cases and weighing up to 70 kilograms. Komodo Dragons have been reportedly found all over Flores (including Ende!!!) though the largest populations can be found on Komodo and Rinca Island. 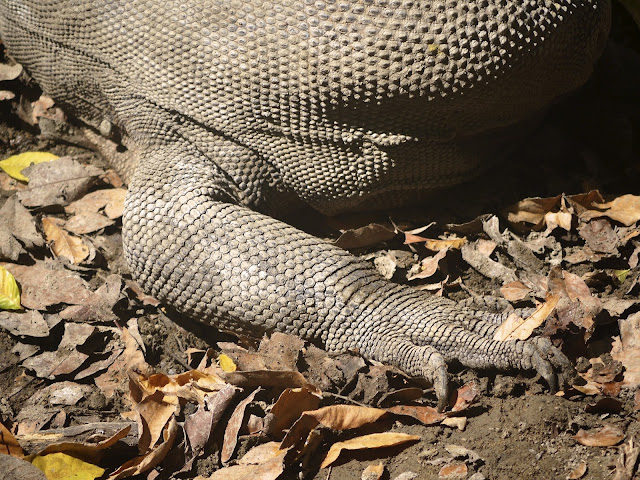 FACT: The Komodo Dragon is a vulnerable species and is found on the IUCN Red List. There are approximately 4,000 to 5,000 living Komodo Dragons in the wild. Their populations are restricted to the islands of Gilli Motang, Gilli Dasami, Rinca, Komodo and Flores. However, there are concerns that there may be only 350 breeding females. To address these concerns, the Komodo National Park was founded in 1980 to protect Komodo Dragon populations on islands including Komodo and Rinca.


My trip to Rinca was a once in a lifetime experience. To say I've seen a real life dragon was worth the boat fare alone!

What I really learned (besides the fact that Komodo Dragons are quite lazy and inactive most of the year). Is that Indonesia continues to blow my mind with its diversity. I have laid eyes on insects, plants and animals that I have never laid eyes on before and it seems each day I discover something new. I'm glad I made the trek to see the Komodos.
Posted by Unknown at Wednesday, October 03, 2012