Two Weddings And A Funeral

It was a rather uneventful morning at work. I found myself sitting at my desk reading reports and secretly hoping that someone would decide to buy some pisang goreng (fried banana) for an afternoon snack.

Suddenly I realized everyone else in the office was packing up. I looked at the clock, hmm... 12:00... where is everyone going. Sensing my confusion my coworkers asked “Mau ikut...?” (Do you want to join?) Join what I asked. After some miming and the use of the word “mati” (dead) I came to understand they were all going to attend a funeral. So I agreed, sure “Mau ikut” .

10 minutes later I found myself staring at my first dead body. Here I was sitting on a small plastic chair in the living room of a family I’d never met, surrounded by candles a coffin and a roomful of elderly frail women with beetle nut stained gums. We stayed for all of 20 minutes, chatting over tea, saying a prayer and offering a white envelope of money for the family. Meanwhile outside the ‘men’ prepared for the service that would take place later that afternoon by setting up a large tent and arranging more plastic chairs in the front yard. It was a day of firsts, first funeral, first view of a dead body, and like many firsts in life it was not at all like I thought it would be...

Back in March I was invited to my first wedding here in Ende. Pretty much from the day I arrived in Ende, everyone had been talking about Halima’s wedding. She would wed a member of the police force in town so there would be a lot of important officials in attendance. The office was kind enough to arrange to pick me up on the day of the wedding.

Imagine my surprise when Chelly the city driver was knocking at my door at 8:00am Saturday morning! I had assumed the wedding was at 8:00pm not 8:00am. In what I can safely assure you was the quickest I have ever gotten ready for an event I went from pajamas to wedding attire in 5 minutes flat and was out the door to attend my first Muslim wedding.

After rounding up a number of other members of staff from Bappeda we finally arrived at the wedding around 9:30am. If you are attending a wedding (or funeral) in Flores, bring a white envelope filled with money (my second mistake of the day). We were quickly seated in a row of plastic chairs and listened to end of the official wedding ceremony. The ceremony was followed by the entrance of the newly wed couple along with both of their parents to a small stage, numerous speeches, presentation of gifts and a receiving line to meet the couple.

Later food was served buffet style and eaten in our rows of plastic chairs. Followed by traditional dancing including the poco-poco, ganing-ganing and the hansen. I quite enjoyed learning the traditional dances despite my two left feet. The wedding activities wrapped up around noon (as everyone deemed it was too hot!).

My second wedding experience was for a male co-worker at Bappeda, Angki. This time around I made sure to confirm the timing and after much debating among my coworkers was assured that I should only attend the reception (the Catholic church service reserved for close family only). This time around I was escorted to the reception by Arie who promised to pick me up from my kos and return me home whenever I wanted to leave (had I realized how close the reception hall was to my house I would have driven myself, though the lift was appreciated as its rather difficult to drive a motorcycle in a full length skirt).

I've missed many weddings (and funerals) over the last few years while I've been away. Being invited to these events while I'm away always makes me feel a part of something bigger (and makes me miss home all that much more) 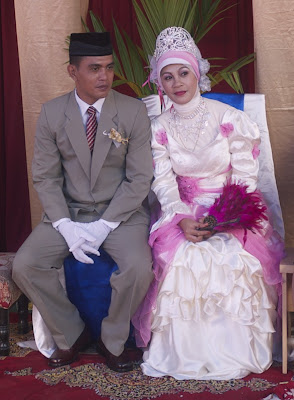