Let me preface this post by saying that in the past I’ve been rather critical of International Environmental Holidays. One day in which the world shines and a high profile environmental issue gets its 15 minutes of fame and then is quickly forgotten about until the same time next year.
Regardless of my cynicism, I had originally hoped to write a very different post on International Coastal Clean Up in San Fernando as I had noticed myself becoming rather impressed by the Philippine Government’s commitment to Environmental Holidays. In fact, International Coastal Clean Up is celebrated every 3rd week of September as mandated by Presidential Proclamation No. 470 here in the Philippines.
In an ideal world an event such as this would have greater impact than just one day. The concept being that working shoulder-to-shoulder, the volunteers in the Cleanup’s global network not only pick up trash, they record every item they find on standardized data cards and send them to the Ocean Conservancy who will compile and analyze the data each year, and publishes the world’s only item-by-item, location-by-location snapshot of marine debris in an annual report. By understanding what is out there, we can work together on solutions.
Unfortunately, this was not the reality of the event this weekend. Although well intentioned, the event became more about speeches, attendance sheets, and photo opportunities. On Friday, Kate and I took part at a beach clean up in a specific coastal area in the city center. From the start, it was painfully clear that the message of the day was not reaching those it should matter most to. During an hour of speeches by City Councilors, Barangay Capitains and event organizers for instance, there was even a plume of smoke rising over the event participants from a nearby household openly burning their garbage (we had to laugh). After speeches, a swarm of 100s of volunteers flooded the beach to “pick up trash”. Sadly, rather than being included in the event, many of the residents in the nearby informal settlements on the beach were confused by our presence. During the hour long clean up, I feel we hardly scratched the surface of the beach. Much of my time and effort went towards digging bags of garbage out of the bank and desperately trying to remove large abandoned fishing nets and wires from the shore. Kate, on the other hand, had a small children throwing rocks at her while she was picking up handfuls of cigarette butts...
CENRO did their best to produce a high-profile, and well organized event but cleanups alone can’t solve the marine debris problem; we need to stop it at the source. Whether we live along the shore or hundreds of miles inland, we are all intimately connected to the ocean (just ask our favorite yogi Eoinn Finn). It drives and moderates our climate. It is the ultimate source of much of the water we drink and much of the air we breathe. It directly feeds millions of people. It also absorbs a great deal of the air and water pollution generated by a world population approaching seven billion people. But our ocean is sick, and our actions have made it so.
Trash doesn't fall from the sky, it falls from human hands. And human hands have the power to stop it. In 2009, 60 percent of the debris collected and cataloged consisted of single-use, disposable items. Volunteers picked up 1.1 million plastic bags and enough cups, plates, knives, forks, and spoons for a picnic for 100,000 people. If you weren’t planning to already, I highly recommend finding a coastal clean up in your area or planning to do your own. The official International Coastal Clean Up Day is happening September 25, 2010, check out: http//www.oceanconservancy.org for more information. Though if you ask me, we should all do our part each day to ensure our trash doesn’t make it to the shore in the first place.
- Meghan

Some photos of the event: 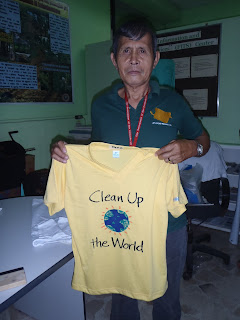 Our favorite Filipino, Tang Cards, showing off his new t-shirt 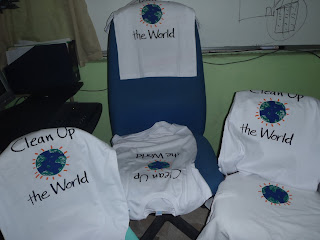 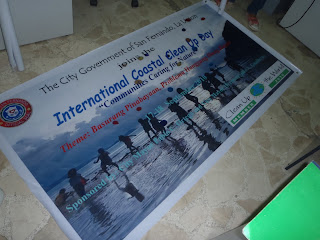 Wouldn't be a proper CENRO event without a Tarpulin or two! 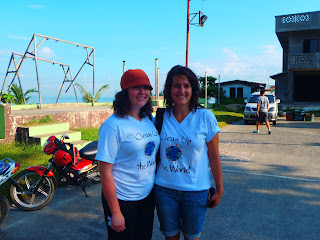 Kate and I...getting amped up 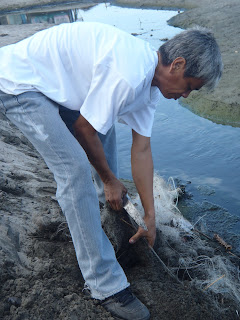 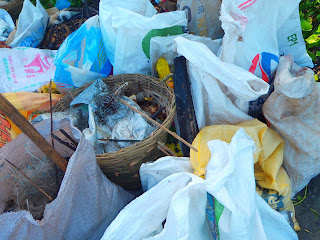 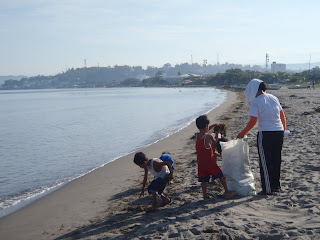 Some local children helping out 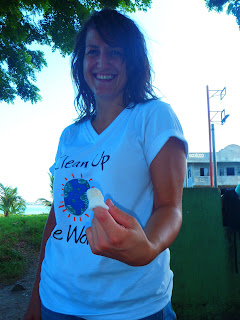 Kate's hangnail is swiftly dealt with by the local health office
Posted by Kate at Sunday, September 19, 2010