As per the piles of literature I've received from numerous organizations on culture shock and the various ways it should affect one while abroad, I believe it has become quite obvious that Meghan and I are no longer in the 'honeymoon stage' of our trip. We've both had our fair share of breakdowns these past couple weeks, ranging from a simple "I hate everything" statement when trying to find a pool to cool off in that wasn't full of creepy old white men to a rather bold display of emotions at the office wherein I decided to storm out of the lunchroom during the afternoon snack period (of ice cream and white bread sandwiches) in tears, only to have one of the old interns who is still here to use free internet take me aside and try to soothe me by telling me that I won't be lonely forever. "You'll make friends once you move to the beach", he says.

Indeed, things have been a bit trying these days. I've been having out of control back spasms, Meghan keeps getting sick, and we both keep getting frustrated with those ever predictable feelings of loneliness and boredom one gets while abroad and that one horrible and self-defeating question we keep asking ourselves..."what are we doing here???"

Thankfully, there's light at the end of the tunnel and it does seem as though work is going to start picking up soon. We've been handed the task of creating a new ecological solid waste management manual for the city environmental office which is a bit overwhelming when thought of in abstract terms but exciting nonetheless. I'm excited to put my LUMID 'training' to use and focus group the hell out of this place!!!

Furthermore, one of my supervisors found out about my thesis and the deep intrigue I have for informal waste activities and has given Meghan and I the freedom to create a proposal for doing a city-sponsored study of the informal waste workers here in San Fernando, and the conditions in which they're working and living. I'm super keen on this idea but I also worry that we don't have enough time to do a thorough job on this and the manual...as we also have two new neighborhoods to implement solid waste management plans in before we go. 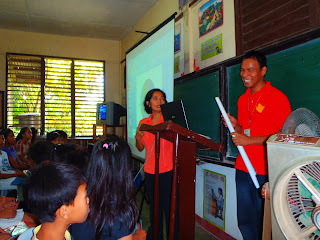 Our supervisor Celso, teaching a couple of grade 5 and 6 classes about Climate Change. Meghan and I made the presentation and it was beyond confusing for these kids. 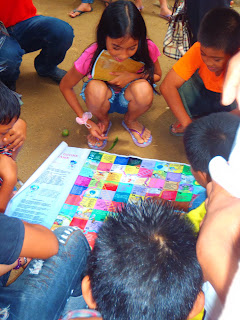 Snakes and Ladders with a climate change theme! There are so many ways to make global warming seem fun! 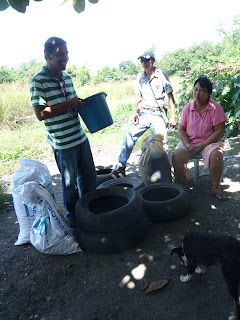 Celso doing a composting demo in one of the neighborhoods who have just started a Solid Waste Management program. They use recycled, stacked up tires as composting bins instead of the big fancy plastic containers we have in our backyard. Shame on us. 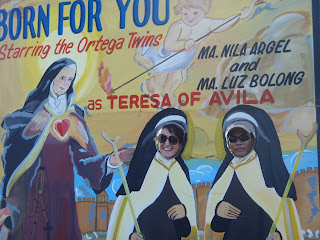 Me and my favorite co-worker poking fun at religious forms of entertainment. Well, at least I am. 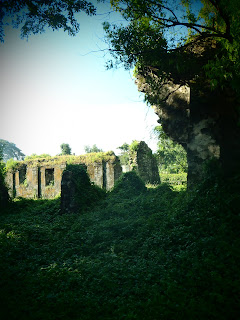 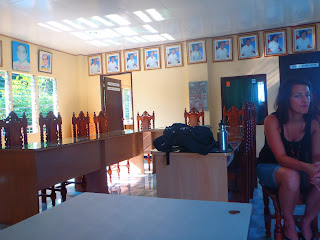 Me, angry about waiting another hour for another solid waste management meeting that we are way too early for. 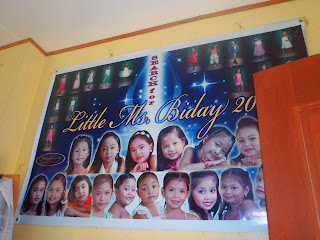 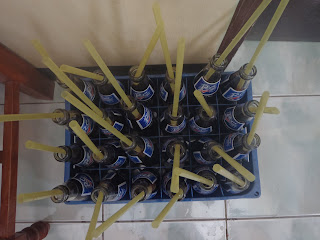 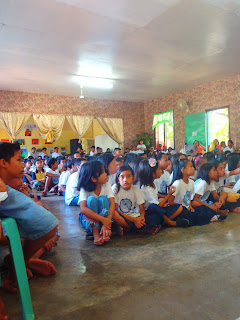 Another youth presentation...this time on recycling. 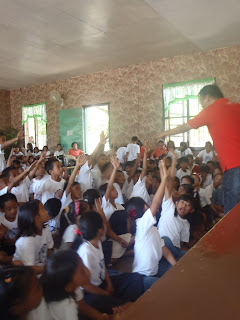 The kids getting excited about source segregation (and the prizes he's giving out for both correct and incorrect answers). 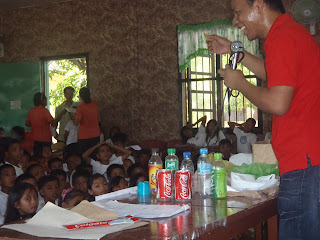 You can't see it in this picture, but this is when Celso started holding up the compostable items that Meghan and I brought from our kitchen and has everyone laugh at us for not eating the peels from our apples.
Original Video - More videos at TinyPic
Recycling!
Posted by Kate at Wednesday, September 29, 2010

Email ThisBlogThis!Share to TwitterShare to FacebookShare to Pinterest
Labels: Philippines